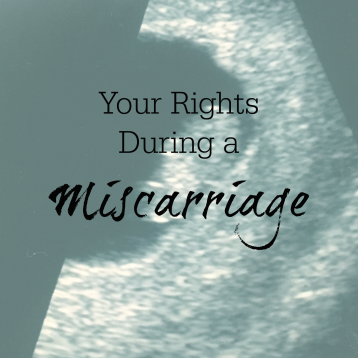 This topic is the one that has led me to start this blog in the first place; something I never thought of doing before now, or that I’d ever do in the first place.  This article surrounds sensitive issues and brings forth many emotions and I do not intend to censor myself, so fair warning for those readers with sensitive minds.

My third miscarriage is happening to me as I write this. Well, trying to anyways.  I have been dealing with this for 3 weeks now and I am beyond ready for it to be over.  By saying trying to, I mean that when I found out the pregnancy was inviable the doctors prescribed a drug called Misoprostol, which is intended to force ones uterus to expel the contents (it’s also used in early medical abortion).  For me they gave me 8 pills, 2 doses of 4, that you insert vaginally with your finger and some lube, which in itself is unpleasant at the pills are hexagonal in shape, about the size of a medium-sized pen around. Who the fuck decided that a pill with six corners is good for insertion anywhere? Some doctors prescribe them orally, but still, swallowing corners? Not my idea of a good time, let alone shoving them inside my vagina one by one until 4 of them are up there. How hard would it be to give an applicator with them, or make them round? For the second dose, to be taken 24 hours later I rigged up my own applicator using a tampon; it was WAY easier, no pain. Anyways, the pills didn’t work this time.  You’re supposed to have cramps and clots come out heavier than a normal period, soaking a maxi pad in 2 hours or so, I didn’t even bleed enough to soak a panty liner.

The 2 miscarriages I had before were dealt with the same way.  The medication worked great with the first one. I moved on with my life after about a week off of work.  The second one didn’t go so well; I thought it had worked but a few days later (maybe a week, I honestly don’t remember) I ended up with a sudden 104 degree fever, rigors, and ended up in the hospital with septic shock from endometritis. That was a result from retained pregnancy products or bacteria getting into my uterine walls from the miscarriage, don’t know because they didn’t do an ultrasound, just gave me antibiotics and I didn’t die. So that’s nice.

On the first ultrasound I had with this current pregnancy, the ultrasound technician said something about the shape of my uterus; “Has anyone discussed with you the shape of your uterus”? she asked, I said no.  She did the internal ultrasound, which people might recognize as a bad sign when you should be able to detect a heartbeat using the external one, and left the room to talk to the doc. They came in and said that we were in the window where a heartbeat may or may not show up and I would need a followup, and that I have a bicornuate or heart-shaped uterus, also that I had a bleed and they were surprised that I wasn’t bleeding already, and my family doctor would be in touch.  I already knew where things were headed, but doctors need to be sure.

She called me later that day, and apparently, a deformity like that is something that arises during embryogenesis, of me, in my mothers uterus.  I would need surgery to reshape it after this pregnancy is over, whenever that may be, and it’s likely the reason for my previous miscarriages, and now this one.  What pissed me off is that I had had 5 ultrasounds before that, 1 being a complete pelvic exploration and not one person mentioned anything about it. I don’t know whether it was lack of training, experience, or concern for me as a patient, but it should have been spotted and, if it had, I wouldn’t be in this situation in the first place. So I harbour quite a bit of resentment towards those people for missing something a trained eye has no excuse to miss.  One more thing to have to deal with aside from the miscarriage itself.

When my doctor found out about the shape of my uterus she put me on bed rest for 2 weeks, then I had my next ultrasound which confirmed the inviability of the pregnancy and I was referred to the Early Pregnancy Loss Clinic in my area.  The ladies there recognized me, not the best thing to be remembered for, but they’ve always been amazing and nice to deal with given the situation. How someone could do their job every day baffles me.  But since my case turned into high risk, they wanted to avoid a D&C, which is why they prescribed the medication. When the first 2 doses didn’t work they gave me a 3rd and 4th.  The doctor that prescribed me the 3rd and 4th doses told me if it didn’t work that they would do a D&C, but after the medication had no effect, a different doctor told me a D&C was out of the question and that my only option was to wait around for it to happen on its own and would result to surgery only if I started bleeding excessively or got an infection.  Waiting could last up to two weeks or more.  Isn’t preventative medicine better in any case?  Why wait until an emergency situation before dealing with something when it can be avoided? And why am I being forced into an option I clearly do not want? I want this to be over, not have to wait 2 more weeks for something that probably wont work given my history, making it over a month that I’ll have to be off work, which I said to them. They said there’s nothing they can do if the doctors won’t do the procedure, so I hung up the phone angry and crying.

How is it appropriate to tell a woman, me in this particular situation, she cannot have options with her reproductive health? That the only thing I can do is sit here and wait and suffer in my head because some doctor is too scared to do a routine procedure that would be slightly more complicated? Find me someone who will.

Today I called around to my doctor and a Women’s Health Option Clinic and they had no problem getting me in (granted they use IV sedatives and local anesthetic compared to the general that the hospital would do, which is where the loss clinic is located, and the latter is something I would prefer).  I called the hospital back and said if they weren’t willing to help me that I would go elsewhere, but that I’d prefer them to do it.  They called back after a few hours and scheduled me a D&C with the original doctor who said they would do it.

Why did I have to strong-arm my own team of people to do what I want with my own body? Maybe they’re doing what they think is right, and safe, but how do they know what’s the best for me, when I’m telling them exactly what I want? I feel like even waiting for the appointment to arrive, which is in a week, is going to put me in the loony bin.  Why should I have to go to a place that offers abortions to handle a miscarriage. It’s already hard enough, just get it out, like you said! Forcing someone me wait it out is an unacceptable option, because it isn’t MY choice.

It made me think of how so many women struggle with people telling them what to do and what not to do and shaming them for doing what they want to themselves, I hadn’t really experienced it to the level that I did today, and my experience wasn’t even that hard compared to others. They took my choice away, when there wasn’t even the pro-life argument that embryos have human rights. Shouldn’t it have been a no brainer?

The more I thought about it, the angrier I got, and here we are. I wanted to reach out to all those women in privileged countries such as my own who seem to think that women’s rights activists are useless and we don’t need feminism. If we didn’t there wouldn’t be any question of whether my choice could be met or not, it would have been about finding someone who can help me.  I shouldn’t have had to strong-arm my doctors into helping me when they have all the options right there.

I keep thinking if I were a dude needing reproductive help things would be way easier.  At my second ultrasound, I was sitting in the waiting room, and they had an add about free vasectomies offered to men.  Men aren’t questioned when they want those procedures, at least not the ones I know that have gotten them, but women, especially young ones who want their tubes tied are often denied because doctors think they just don’t know that they don’t want kids.  Male birth control is free, yet it costs upwards of $500 to get an IUD, birth control pills aren’t free, nor are feminine hygiene products.  For me they’re even more expensive because the drug store brands give me chemical burns so I require organic pads and tampons. This is unacceptable also. We do not have equal rights when it comes to reproductive health in Canada, still. Despite it perhaps being better than other countries, that is no reason for people to claim that fighting for equality is bullshit because it already exists. It doesn’t, although it has come a long way, don’t get me wrong, since it was okay for men to rape and beat their wives.. And to say that it does is to discount other people’s experiences, as well as the people, the women, who fought to get us where we are now. The fight isn’t over though.

Just because something doesn’t personally affect you, doesn’t mean it isn’t real for others and to claim otherwise is plain ignorant. Especially when you have means to facts and people that prove otherwise; that makes you willfully ignorant, which is even worse.  My recent experience with this miscarriage has just shown me more of a reason to push for something I already believed in, and has given me a new insight to other peoples’ plights.  If I can get or give nothing else from this traumatic experience I am at least glad for that.

4 thoughts on “My third miscarriage…”