One thing that drives me absolutely nuts is the fact that SO MANY people perpetuate the false and dangerous misinformation about vaccines, telling people not to get themselves or their children vaccinated.  I get that it’s hard to sometimes tell what’s real on the internet and what isn’t, I’ve often shared something that someone has told me wasn’t true or the whole story.  Shout out: Thanks to those people who are looking out.  A lot of you that share these alternative facts about vaccines, however, cannot be educated; your views are right despite the abundance of evidence, scientific and physical, to show otherwise.

You continue to tell people that vaccines contain mercury and will cause autism. 1, mercury poisoning and autism are not the same thing (click here for ways on how vaccines cause autism). 2, vaccines don’t contain mercury, they contain thimerosal which is metabolised into ethylmercury (not methyl mercury or elemental mercury). Comparing ethylmercury to methylmercury is like comparing ethyl alcohol, or ethanol (drinkable), to methyl alcohol, or methanol (do not ingest).   For those of you that care about chemistry, the only difference between methyl and ethyl is a hydrocarbon group, which drastically changes the

chemical properties making one toxic and one not. Ethylmercury is cleared from the body within ten days, and was removed from all childhood vaccines due to people bitching and FRAUDULENT RESEARCH in 2001  (the twat that wrote it no longer has a medical licence, made a bunch of money from lawyers and lives in a mansion in England.  He doesn’t give a crap about your health and safety).  So, why are you still bitching?

Formaldehyde is another scary chemical you bitch about.  It is found in the air, soil, food, bottled, surface and ground water.  The most common way of exposure is by air.  Most non industrial exposure comes from the combustion of organic material like tobacco smoke or car exhaust.  If you’re really worried about formaldehyde in your system, though, you should probably tell your body to stop making it on its own, and while you’re at it, stop eating apples and pears.  Processes like methanol oxidation, methylamine deamination, and histone demethylation make formaldehyde, while others, reduction to methanol via the cytosolic alcohol dehydrogenase 1 or by oxidation to formate, dispose of it.  The EPA has looked at the level at which a human can consume formaldehyde, on top of what their body produces every day, where there is no observable effect.  That number is 200 mcg/kg/day, which is played waaaay safe; an apple contains 6300–22300 mcg/kg, pears contain even more, 38700–60000 mcg/kg.   All childhood vaccines contain less than that, and it doesn’t build up as it is reduced and disposed of in the body just like naturally occurring formaldehyde because the chemical structure is EXACTLY the same. Have you ever gotten any sort of ill feeling from eating an apple or pear or anything else on that list? Probably not, so shut the fuck up.

You also bring up the fact that they think vaccines contain live tissues, of humans or other animals.  I can sort of see where this mistake comes from because the cells are used in the PRODUCTION of vaccines.  Because, VIRUSES NEED SPECIFIC LIVE TISSUE TO GROW- shocker.  The viruses aren’t injected into live animals, either they are cultured in a petri dish (click here if you’re interested in basic cell culture protocol for human umbilical endothelial cells). All cells are then removed during purification.  Another issue is that the human cells come from aborted fetuses.  Come on people, the babies aren’t aborted for the making of vaccines, they’re aborted because for whatever reason that’s none of your business, a woman chose to not take that path in her life at that time.  Think about it more like organ donation, someone else can benefit, by not getting sick and dying, from using the necessary tissue.  Would you really rather just trash it?

Even if all that garbage were true, would you really want to contract one of the vaccine preventable illnesses and suffer from its symptoms, including DEATH, than a potential, rare, issue caused by whatever the fuck you think you’re talking about?  Or if they did cause autism, are you really that afraid of people with genetic psychological differences and/or impairments? It doesn’t make any sense.

Please stop ignoring facts and science, and endangering the lives of the people around you as well as yourself.

Here are some lessons from history, incase you forgot what it was like before vaccines, courtesy of RtAVM: 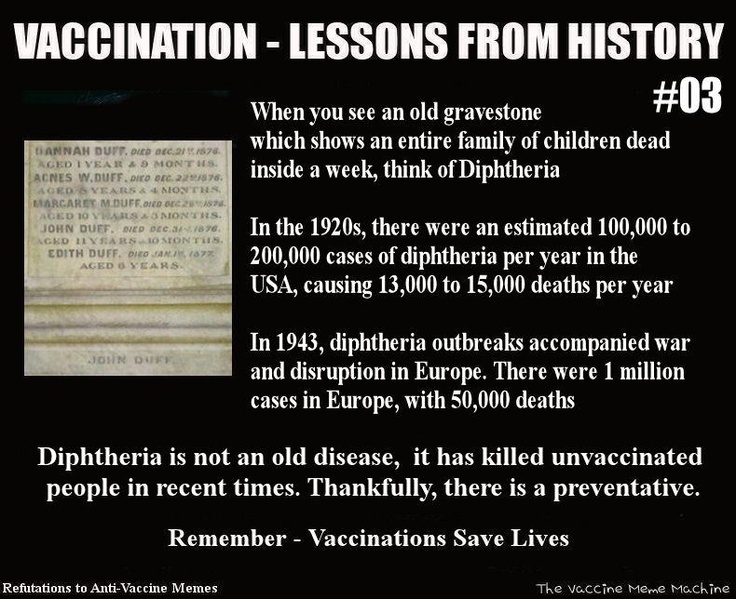